Read my 2-year update here. No longer affected by the initial euphoria, I describe some additional side effects I’ve noticed. Still, I’d do it again in a heartbeat.

All my life I’ve had quite terrible vision. My myopia peaked at -8.5 and -8.0 when I was about 20, with a bit of astigmatism on each eye, and has stayed stable since then. If you don’t know what -8.0 implies, it means not recognizing people at 1m, they’re a blur.

At about 15 I started with contact lenses and have kept that up since, but it’s really a hassle with all the cleaning and poking in your eyes each morning, not to mention the dryness in evenings. So about four years ago, I was evaluated for LASIK surgery. Turns out I’m far from an ideal candidate - the ophtalmogist was not comfortable lasering away the amount of cornea required to fix -8.5, and my large pupils were a risk factor. So I decided to keep struggling with contacts and glasses.

Then last year I heard that a new option had now been around long enough to be considered safe - ICL, or "Implantable Collamer Lens". In this procedure, an extra lens is inserted in front of the real one, in the space between the iris and the lens. It’s like having a permanent contact lens inside your eye. This technique originally required poking a hole in the iris with a laser to ensure fluid flow in the eye, but nowadays they make a small hole in the ICL lens instead. Stunningly enough, the hole barely affects vision at all, so it’s all good.

I went to get checked, and was told I was an ideal candidate, except for my slightly too large pupils. Plenty of space in the eye to insert a lens in. So I decided to go for it this time!

The day for surgery came, and I went through a very painless procedure, I mostly remember bright lights and feeling much more comfortable than I had expected. The first couple of days after surgery my vision wasn’t great and my left pupil was severeley constricted, but all such side effects faded away in less than a week.

And now, three weeks later? All I can say is bliss. Myopia and astigmatism completely gone. Everything is razor sharp - in fact, sharper than I ever got it with glasses or contacts. 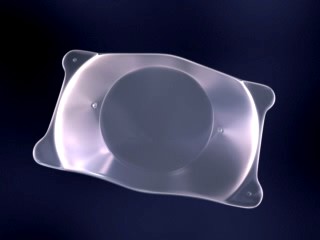 Like with all vision surgery, there is a risk of visual artifacts. I have two phenomena. The first is that I see large but very faint halos around bright point lights. I believe these are caused by the hole in the lens. They are really not in the way as they’re in the edge of my field of view. The second phenomenon is the classic small halo around bright lights when in dark environments. As far as I can tell, these are caused by my pupils expanding so much that they become larger than the effective surface of the ICL lens, and some light is getting bent by the edge of the lens. You’d think they could fix this by making the lens larger than the measured maximum diameter of the pupil but for some reason they don’t.

Still, easily worth it - in daylight none of these effects are noticeable and even at night I have no problems watching movies or driving a car. I do notice the little halos sometimes but I really don’t care - it’s not like contact lenses or glasses are free of artifacts either.

If you’re in the range for ICL surgery, which is -6.0 or worse, and have the spare cash - don’t hesitate, book an appointment now.

I got my surgery at Memira on Vasagatan in Stockholm, and the lenses are Visian Evo. This post has not been sponsored by either, I’m just really happy with the results.